The translation of Witold Szabłowski’s book Jak nakarmić dyktatora (“How to Feed a Dictator”) has been published in the UK. The book was translated by Antonia Lloyd-Jones. The publication of the book was supported by the Book Institute as part of the ©POLAND Translation Programme. 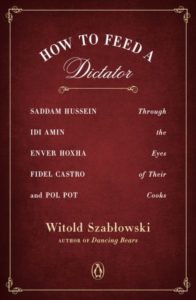 The book How to Feed a Dictator, as reads the title of the English translation of the book, has been recently published by Penguin Books, a leading British publishing house.

Witold Szabłowski travelled around the world for several years to find former chefs of Saddam Hussein, Fidel Castro, and other tyrants. He was fiercely trying to gather information about what they ate at the most important moments of their dictatorship. He carefully recorded everything, both the stories and the recipes. Thanks to this, an intriguing book telling a story from behind the kitchen door was created. The author allowed us to get to know the dishes that were bubbling in the pots when the fate of the world was at stake. What did Saddam Hussein eat when he gave the order to gas tens of thousands of Kurds? And Pol Pot, when nearly two million Khmer died of starvation? And most importantly, did the food affect their rule? Or have any of the chefs influenced politics through their culinary works?

The author of the translation, Antonia Lloyd-Jones, is one of the most outstanding translators from Polish into English; she has translated, among others, Jacek Dehnel, Paweł Huelle, Jarosław Iwaszkiewicz, Zygmunt Miłoszewski, Jacek Hugo-Bader, Mariusz Szczygieł, and Artur Domosławski. She is also one of the mentors of the younger generation of translators. For her merit to Polish culture, she was awarded the Gloria Artis medal in 2019 and, in 2018, the Transatlantyk Award awarded by the Book Institute.