A translation of Anna Bikont’s book Sendlerowa. W ukryciu (“Sendler: In Hiding”) has been published in Israel. The book was translated by Miriam Borenstein. The publication was supported by the Book Institute as part of the ©POLAND Translation Programme. 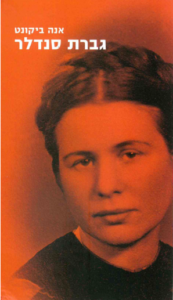 The book was published by Carmel Publishing House.

Sendler: In Hiding is a story about extraordinary Polish women and hundreds of children saved by them.

In 2001, a group of American students came to Poland to write a play about a Polish woman saving Jewish children during the war. Overnight, after years of oblivion, Irena Sendler became a heroine of the media and a symbol of all those who had the courage to oppose evil.

In order to organise help, an efficient system, money, and a network of committed people ready to risk their lives were needed. As Professor Bartoszewski recalled, “it was easier to find a flat to store a chest of weapons than for one Jew”.

Irena Sendler, a woman who undoubtedly did great and admirable things, and in the most difficult times, slowly emerges in this book from the group of people who were united by a common fate – the rescuers and the saved. Those who gave shelter and those who sought shelter.

We also encourage you to watch an interview with the translator of Irena Sendler’s biography, Miriam Borenstein.