The most prestigious distinction for an eminent ambassador of Polish literature abroad, granted by the Book Institute, was awarded this year to Professor Ewa Thompson, a leading American Slavicist and promoter of Polish culture in the United States. 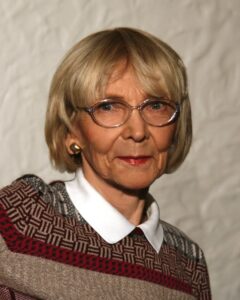 “This award is a signal to me that, for some time now, institutions promoting Polish culture have been focused on something more permanent than occasional speeches and exhibitions. I have been following its fortunes for the past few years, and I believe that it has been awarded to people who are really trying to introduce foreign cultural circles to the wide array of Polish literature, not just the latest productions of celebrities,” said the winner.

“Professor Ewa Thompson has been promoting Polish culture in the United States for many years. Her role as a guardian of young Polish scientists in the USA, including at her university in Houston, cannot be overestimated. Professor Thompson is an example that today, we can ‘interpret’ Polish culture literally, but also the way She has been doing for several decades, i.e. publishing magazines, writing books and articles, acting as a patron,” stated the member of the Jury of the Award, Professor Maciej Urbanowski.

Ewa Thompson (born August 23, 1937) is a professor emeritus of Slavic studies at Rice University, where not only did she raise successive generations of Slavicists, but also edited (from 1981 to 2018) the Sarmatian Review periodical, in which Slavic themes are the main subject matter. Sarmatian Review publishes translations from Polish literature, articles on Polish culture, and scientific texts on the culture, history, and societies of Slavic nations.

Professor Thompson’s particular merits include a monograph on Gombrowicz in English (Boston: Twayne 1979), numerous works on the relations between Poland and Russia, many years of activity in the Kosciuszko Foundation as part of the exchange programme, which enabled Polish humanists to lecture and promote Polish culture at prestigious American universities (this group includes, inter alia, the current ambassador of the Republic of Poland to the USA, Prof. Piotr Wilczek; Prof. Andrzej Nowak, Prof. Andrzej Waśko, Prof. Dariusz Skórczewski), and introduction of postcolonial issues to the scientific discourse in Poland (her interpretation of this phenomenon enabled an innovative approach to the cultural history of Central Europe and Russia).

Professor Thompson’s activity was recognised by the Union of Polish Writers Abroad, and, in 2015, she was honoured with an award for the dissemination of Polish culture and literature in the world.

Professor Thompson has published in such Polish periodicals as Teksty Drugie, Arcana, and Teologia Polityczna, while in the United States, her texts have been published in The Washington Times, Slavic and East European Journal, Modern Age, Slavic Review, and Houston Chronicle.

In her rich academic career – apart from Rice University, with which she has been associated since 1979 – she has lectured at the University of Virginia, Vanderbilt University (where she defended her doctoral dissertation in comparative literature studies, Russian Formalism and Anglo-American New Criticism), Princeton, Witwatesrand (South Africa), Toronto, and Bremen (Germany).

A special interview with Professor Ewa Thompson is available on the website instytutksiazki.pl, and a dedicated text by Professor Andrzej Waśka can be found in the latest, September issue of the “Nowe Książki” monthly.

The Transatlantyk Prize was awarded for the sixteenth time this year. Due to the COVID-19 pandemic and restrictions on intercontinental flights, the award ceremony will take place during a gala that the Book Institute will organise in 2021.

Transatlantyk Prize is an annual award from the Book Institute for an eminent ambassador of Polish literature abroad. The winner may be a translator, a publisher, a critic, or an animator of cultural life.

The award was presented for the first time in 2005 during the Conference of Polish Literature Translators. It was awarded to Henryk Bereska, the translator of such giants of Polish literature as Jan Kochanowski, Jarosław Iwaszkiewicz, Jerzy Andrzejewski, Stanisław Wyspiański, Cyprian Kamil Norwid, and Tadeusz Różewicz. The award is worth 10,000 euros; moreover, the winner receives a commemorative certificate and a statuette designed by Łukasz Kieferling.