On 2nd June, the translation of Mała zagłada (“A Little Annihilation”) by Anna Janko, translated by Philip Boehm, will be published. The publication of the novel was supported by the Book Institute as part of the ©POLAND Translation Programme. 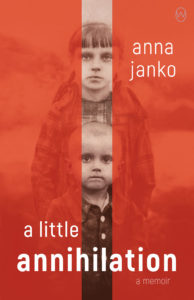 The book A Little Annihilation, as reads the English translation of the book, will be published by World Editions publishing house.

Sochy in Zamość region, June 1, 1943. It took a couple of hours for the village to disappear. The buildings were burned down. Residents executed. Among the smouldering ruins, there was one house left, few adults, and several children. Among them is nine-year-old Terenia Ferenc, Anna Janko’s mother. The girl saw the Germans murder her family. The inhuman image has accompanied her for years in the orphanage to never let itself be forgotten…

A Little Annihilation by Anna Janko is not yet another tragic family story taken out of the obsolescence of World War II. It’s a powerful, contemporary accounting with the trauma of the second generation marked by fear. The brutal, naturalistically described history of the suppression of a Polish village becomes a starting point for presenting ethical and existential helplessness.

Philip Boehm, a winner of the Found in Translation Award for the translation of Hanna Krall’s book Król kier znów na wylocie (“Chasing the King of Hearts”), visited the Translators’ Collegium of the Book Institute in Cracow last year, where he worked on the translation of Anna Janko’s book.